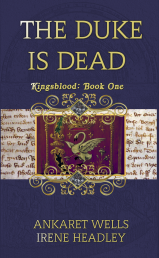 The Three Kingdoms have been ripped apart by the Cousins’ War, between the adherents of Kharis Sidonia, the Duchess of Ambion, called the Bastard Queen, and her cousin Gilbert, called the Blessed. Kharis Sidonia and her eldest son have been brutally slain after losing a battle, but her grandchildren survive, and the eldest of them, her grandson Roald, is ready to win the crown his grandmother should have worn.

As Gilbert has found, and the Ambions will find in their turn, this is a war that will not end easily. Both sides have Kingsblood, the power granted to those meant by God to rule, and what seem to be peace may only be a lull. In the fight to rule, even love may not stand strong.